With an election coming up in the city of Toronto for a new mayor, the mention of subway lines is rampant. Extensions to some and the construction of others has dominated the agenda for most Toronto mayoral prospects in 2014. On March 30, 1954, the promise of several early 20th century Toronto politicians came to being igniting today's debates. With a fleet of red subway cars, the Toronto Transit Commission (TTC) opened the Yonge subway rapid transit line to passengers.

Originally opening as a 12-stop subway running along Yonge street, the first Canadian subway relieved one of the most congested routes in Toronto. 60 years later, the subway now known as the Yonge-University-Spadina line (most recently simplified as line 1) now has 32 connections stretching from Downsview station to Finch station. The expanded Yonge line is an integral part for moving resident as well as travelers to Toronto with links to buses, streetcars and three additional subway lines that became operational since 1954. The Yonge line has given workers, shoppers, event attendees and any other fare-paying individual a relatively smooth way to enter the heart of the Queen City.

Like many political moves, realization of the subway in Toronto was a long time in the making. A new concept during the birth of the 20th century, subways were tunneled by London and New York. A firm of consultants brought the idea of a Toronto subway to the city in 1910. A subway system from Yonge  The first plan of putting a subway specifically to flow underneath Yonge street was first proposed in 1911 but was ultimately dismissed at the time. In 1915, a committee appointed by than-mayor Thomas Langton Church found streetcars or above-ground rails were deemed preferable in Toronto. The talk of a subway would not return to the forefront until several decades later.

In 1942, the TTC presented a new proposal for a subway system to run from Front Street to St. Clair Avenue. The population of Toronto had exploded over the course of decades as 238,080 city-dweller in 1901 became nearly a million by 1941. While the second world war delayed Toronto's subway project, the first rapid transit line was ultimately committed to before the end of the decade. The subway was approved in 1945 by the Toronto City Council with mayor Robert Hood Saunders presiding. Funding was solidified by a municipal vote on January 1st, 1946 with almost 90 percent of ballots in favour of the Yonge line. Construction started on September 8, 1949.

Debuting as a 4.6-mile (7.403-kilometer) line, the portion of the subway operating underground was 3.2 miles in length. The process of digging the tunnels consisted of a careful maneuver that required the locating and/or diversion of water mains, gas mains and the sewer system. Instead of actual tunneling, the underground portion of the Yonge line was excavated. A steel truss deck was installed on the street level so car and streetcar traffic could operate above on wooden planks. The streetcar line previous dealt with moving passengers on Yonge Street was removed with since the subway line replaced the system. Receiving several extensions up to this day, the Yonge line's first additions were added between 1942 and 1946. Davisville and Eglinton stations became part of the first Canadian subway. Davisville area also featured the yard and maintenance area for the subway cars  as well as the control tower for the Yonge line's signal switches (these subway signals are currently undergoing replacement resulting in recent shutdowns of the Yonge line). 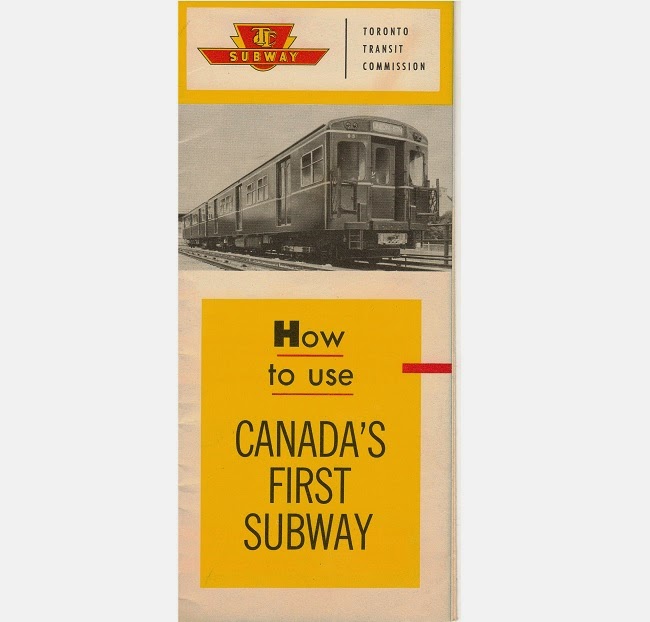 When completed, the $66,000,000 Yonge subway was created with the use of 1,400,000 bags of cement, 240,000 tons of gravel and the excavation of 1,710,000 cubic yards. The ceremonial activation of the Yonge subway took place ahead of March 30th (proclaimed Subway Day with Toronto Mayor Allan Lamport and Ontario Premier Leslie Frost switching power to the first subway cars. Moving the first Toronto subway passengers, TTC ordered 104 cars from British based Gloucester Railway Carriage & Wagon Company. With four 68 horsepower electric motors on each car, the 62-passenger Gloucester cars were painted red. 128 of the cars were constructed with steel bodies while 6 were made of aluminum. Originally, two to six cars were connected to move passengers with a maximum travel speed of 50 miles per hour. The Gloucester cars would remain in service for 36 years finally retired in 1990.

As passengers boarded the first subway system in Canada, the transit solution was introduced with some introductory pamphlets for riders. An adult fare cost 15 cents and offered free transfers to non-subway routes. Before it opened, the forecasted capacity of the Yonge line was 40,000 passengers per hour. This estimate was gross under-prediction to the popularity of the subway system. Starting with 104 cars, the TTC quickly added 34 additional cars to handle the runaway success of the Yonge subway. By 1960, 360 million riders had been carried along the original Yonge line.

When the Yonge line was under construction, city planners prophetically recognized potential growth of Toronto's rapid transit system. Expansion of the Subway system was immediately talked about for the Yonge line. As the Bloor-Danforth subway line was planned to flow west-to-east, extension of the Yonge line saw the flow two miles from the other side of Union station. Connecting to St George station, this University section of the subway line was opened on February 28th, 1963. From 1966 to 1974, expansion beyond Eglinton Station saw the subway line stretch to Finch. In 1978, the University side of the Yonge subway line led to Wilson station (connecting the Yorkdale Shopping Centre to the TTC rapid transit system). Today, as the Yonge-University-Spadina subway line celebrates its 60th anniversary, expansion into Vaughan is underway and planned for completion in late 2016.

Starting as a 4.6-mile line, the Yonge-University-Spadina now stretches 18.8 miles (24.1 miles once the Vaughan Metropolitan Centre station is operational). With the success of the Yonge line resulting with the construction of the Bloor-Danforth and Sheppard line in Toronto, the city of Montreal would later join Toronto as a subway city. The Yonge subway line has been one moment where plans going down the tubes has resulted in a 60-year success.

June 27, 2020
CLRV 4005 and another CLRV streetcar at King and Yonge during August 2014 (Photo Credit: Chris Nagy/Toronto Time Machine) On December 29th of 2019, the final example of one of Toronto’s moving icons since the 1980s was retired from active service. Streetcars assembled under the CLRV (Canadian Light Rail Vehicle) design ended its 40-year career with six examples running on its final day. The CLRV and its longer sister the ALRV (Articulated Light Rail Vehicle) was introduced as a modernization of Toronto’s streetcar network that has not only been preserved through the vehicles but thrived entering the 21st century. When the Toronto Streetcar Almost Died and Path to Rebirth  Prior to the development of the CLRV, streetcars were starting to become less vital for the TTC (Toronto Transit Commission) as subway links replaced the two very congested route. Toronto’s first subway originally running on Yonge Street was opened on 1954 while the Bloor-Danforth entered operations in 1966. At the
Post a Comment
Read more