Today marks a point of a genesis for the City of Toronto we currently recognize.

Built at a cost of $27,035,000 in the 1960s (other sources report 31 million), Toronto’s municipal government’s nerve centre was officially opened on September 13th, 1965. A ceremony presided with the then-Mayor Philip Givens, the city celebrated the official opening of the building we know today as New City Hall. Shaped through 91,000 cubic yards of concrete and roughly 8,733 square meters of glass, Toronto’s New City Hall is identified for two multistory towers (a 27-floor east tower and a 20-floor west tower) as well as a 155-foot diameter Council Chamber. Now a 50-year-old structure, New City Hall continues to amaze the world as a stunning icon to what Toronto is and what it could be.

New City Hall was one of many builds in Toronto that took a long time to come to fruition. During the early part of the 20th century, the local government outgrew so-called Old City Hall (opened in 1899) and began contemplating a larger municipal building in 1925. After several proposals were dismissed over several decades, Mayor Nathan Phillips prioritized the construction of a new city hall shortly after his election win in 1955. Not keen on the previous city hall ideas, the Toronto Mayor pushed for an international competition calling architect everywhere to create what could be the home of the Canadian city’s local government. With 520 architects answering the call with some conservative as well as radical views for Toronto’s future city hall, the winning design of the two towers and domed Council Chamber envisioned by Finland native Viljo Revell prevailed in 1958.

While there were critics who regarded the futuristic styling of New City Hall as unappealing, the image of the building received a resoundingly positive reception. Even before New City Hall was built, Toronto and Canada in general celebrated the Revell-designed structure in promotions. The prominent image of New City Hall appeared in a 1960 brochure for the Meteor automotive brand (a Canadian-oriented car line-up built and sold by Ford Motor Company). Tragically, Revell passed away before the full-scale structure inspired by his design was completed. 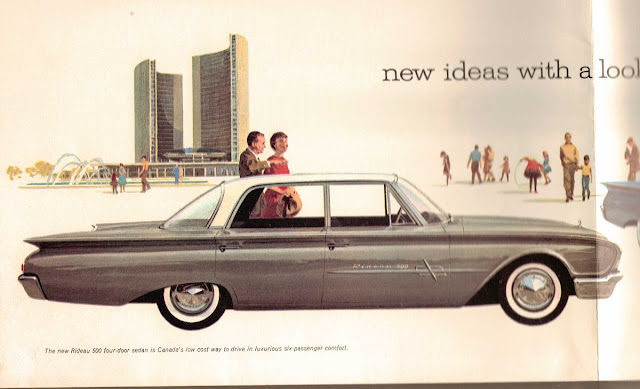 A three-level underground parking lot capable of accommodating 2,400 vehicles was needed since the new building meant the centralization of Toronto government departments that were previously distributed across the city. A public library and later a daycare center would also be incorporated with the civic building. A green roof is among other features that have been incorporated into New City Hall after its official opening.

Initially, Toronto encouraged tourists to marvel at the building and the city scape surrounding it. An East Tower Observation deck and a gift shop were components of New City Hall that have since been cut off to general tourism. The gift shop was closed while the observation desk access is no longer offered to the public (with exception to Toronto’s recent Doors Open events). Despite a few tourist lures being excluded from New City Hall, the building continues to be well-travelled attraction.

Unavailable with the previous city hall layout, a large square incorporated with New City Hall has provided a venue where the citizens of Toronto and visitors can gather. Plans of a ‘Victoria Square’ connected with the Old City Hall stalled decades before the construction of the newer government building. In honour of the mayor who spearheaded the successful creation of Toronto’s new city hall, the area gained the name Nathan Phillips Square. While largely concrete, Nathan Phillips Square promotes a colourful, lively way for people to take in the city. A 55.47-meter by 29.87-meter reflecting pool doubling as an ice rink during the winter time serves as a relaxation spot in a city where life seems to rush by. This reflecting pool is covered by handsome arches coordinating nicely with angular presentation of New City Hall. An elevated walkway surrounds the square while a Peace Garden is also present in front of Toronto’s city hall.

Over the years, Nathan Phillips Square has played host to many moments in Toronto history. Sad moments such as the Jack Layton’s 2011 passing saw the square serving as a temporary memorial for the public supporters to share respect for the former Toronto Councillor and leader of the federal NDP party. In happier times this summer, Nathan Phillips Square hosted many festivities for the 2015 Pan-Am and ParaPan-Am Games. A giant ‘Toronto’ sign assembled ahead of the Pan-Am Games has become a monument proving magnetic for group portraits and selfies.

While the City of Toronto has ancient connections to me as my birthplace, it was only during the summer of 2014 that I formally acquainted myself with the attraction. "Isn’t it weird that a building serving the serious functions of local government could be such a beacon of imaginative thinking?" I thought as I wandered around Nathan Phillips Square during an odd time that no major events were transpiring. For me, looking at New City Hall was like seeing the past, present and future collected in a single image. I ate a hamburger and drank a Coke from a Hero Certified Burger stand on-site and sat down finding moments of tranquillity after hectic travels through the Toronto subway and shopping malls. Amongst the peaceful thoughts and reflection I felt, I watched the city in motion around me thinking if it was right to be too still. A beautiful sight of people coming and going, TTC streetcars and buses gliding by as well as the occasion dongs from Old City Hall clock tower soaring through the air awoke me once again. Admiring life in Toronto as well as the beauty of New City Hall, I gained an electrifying sense causing me to be challenged and thrilled into finding some purpose in a place in the world I have been greatly honoured to be. In truth, I am still not firmly certain to my mission but there remains the spark from which I gained from the experience in Nathan Phillips Square.

Entering its fifth decade strongly cemented as a staple of a modern Canadian metropolitan, it would be hard to dispute the impact New City Hall has had on Toronto. The construction of the future-thinking building has served as a driving force of architecture. Since 1965, Toronto’s landscape was modernized by buildings such as the CN Tower, Toronto Eaton Centre, SkyDome (now the Roger’s Centre as well as a slew of high-rise towers and condominiums.

Known as New City Hall even after 50 years, the building continues to be a vision of what could come.

June 27, 2020
CLRV 4005 and another CLRV streetcar at King and Yonge during August 2014 (Photo Credit: Chris Nagy/Toronto Time Machine) On December 29th of 2019, the final example of one of Toronto’s moving icons since the 1980s was retired from active service. Streetcars assembled under the CLRV (Canadian Light Rail Vehicle) design ended its 40-year career with six examples running on its final day. The CLRV and its longer sister the ALRV (Articulated Light Rail Vehicle) was introduced as a modernization of Toronto’s streetcar network that has not only been preserved through the vehicles but thrived entering the 21st century. When the Toronto Streetcar Almost Died and Path to Rebirth  Prior to the development of the CLRV, streetcars were starting to become less vital for the TTC (Toronto Transit Commission) as subway links replaced the two very congested route. Toronto’s first subway originally running on Yonge Street was opened on 1954 while the Bloor-Danforth entered operations in 1966. At the
Post a Comment
Read more