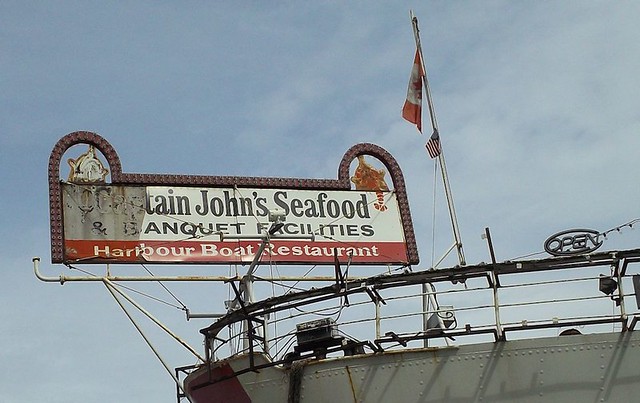 Despite using Union Station often in recent years, Frankly, the city of Toronto scared me even as I became an adult. It seemed like such an easy city to get lost in and I am a person who is most comfortable with knowing my surroundings in detail. From years ago, I remembered being in the downtown area and seeing the Sam the Record Man sign lit but I never gathered the time nor courage of seeing the flagship Yonge Street store. That opportunity of seeing the past of Toronto escaped me. Thanks to openness of digital photography and my deepened desire to explore the Canadian city, I was drawn to the Harbourfront area almost by chance last month (April 2015), another disappearing landmark did not escape my sight. On the ship known as the MS Jadran, the former dining hotspot that was Captain John's Harbour Boat Restaurant sat awaiting its eventual, inevitable fate.

In April, I had undertaken a short photographic excursion around Toronto. At the Harbourfront area and Queen Quay, one of my main objectives was to capture images of the new Borbardier Flexity Outlook streetcars as they operated the 510 route. Fortunately, it was mission accomplished leaving me I now have my own shots of the future for Toronto transit. Realizing the congestion of Union Station during a weekday afternoon, I decided to avoid it for awhile spending a few more minutes at the Harbourfront. With only a short walk, a recognizable ship was spotted in the harbour. Familiar with the vessel's appearance after seeing it on the news, it was my one and only opportunity to see what was Captain John's Harbour Boat Restaurant for myself.

Sitting in the harbour, the former seafood eatery's best days appeared to have been long behind it. The MS Jadran was faded and covered with a fair bit of corrosion resulting from several years left neglected along the Toronto dock. Much of the Captain John's seafood signage on the vessel was faded. Amazingly, a Canadian flag and smaller American flag on the bow section of the ship appeared fairly clean. 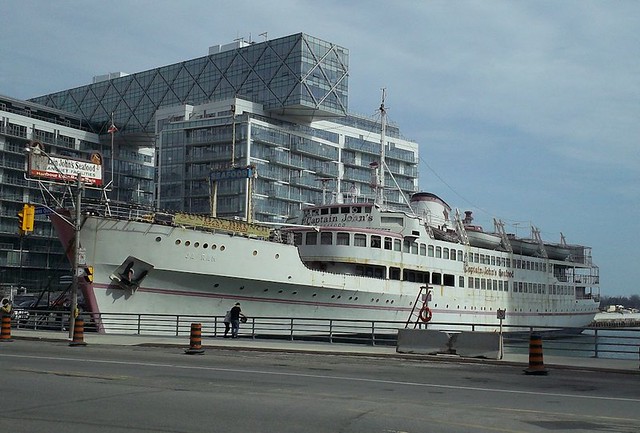 Aware of the drama behind the closure of Captain John's and even the aborted salvage attempt for the MS Jadran last year, I knew it was only going to be a short matter of time to see what was a place where once Bob Hope and former Canadian prime minister Brian Mulroney was ate. Being some years since a meal was last served on the ship (sources show 2012 was the time Captain John's seafood restaurant was shutdown by the Toronto Port Authority and health department), it was amusing to find the menu in a windowed cabinet on the dock. The Sunday Brunch menu gave insight to the seafood cuisine served in the latter days of Captain John's. Appetizers included Bluepoint Oysters, Nova Scotia Smoked Salmon and a $9.95 Jumbo Shrimp Cocktail while the New York Cut Sirloin Steak topped the list of specialities. In a cabinet beside the menu, information for booking Captain John's Harbour Boat restaurant for functions described itself as "The Love Boat". Looking at the relatively unkempt state of the ship from the outside, it's hard to say whether the love was felt onboard the vessel.

Below the menu was a worn and weathered article that touted the history and legacy of Captain John's. The story mentioned the Air Canada Centre as a new addition to the area in Toronto so the article was probably written about 15 years ago. Some will certainly note the browning paper as ironic based on the restaurant's fall from grace as being a favoured attraction of Toronto residents and tourists.

Towed out of Toronto's harbour on Thursday, the MS Jadran is now another ghost of the city's past part of a transitioning landscape. Cranes, street construction work and new buildings has been ongoing as items as old cultural gathering places are making way for what will become establishments for a new city beat.

March 22, 2015
Photo Credit: Robert McMann In the past several years in Toronto, one of the most contentious issues has revolved around a new transit extension into the Scarborough region of the city. With debates turning surprisingly passionate over transit planning, both teams plan to replace the Scarborough Rapid Transit system (Scarborough RT) or most recently called Line 3 by the Toronto Transit Commission (TTC). This weekend marks 30 years of moving commuters between the Kennedy TTC station to McCowan. For March 22nd, 2015, the Scarborough RT's 30th anniversary of public operations will not celebrated with the same appreciation as Toronto's subway. Last year's 60th anniversary of the Yonge subway line recognized the liberating sense of movement it brought to a vital piece of the city. Admiration for the challenging of the subway in Toronto has ultimately led to favouritism of the Scarborough RT's over 3-billion dollar replacement extension of the Bloor-Danforth Line
Post a Comment
Read more